The Many Faces of ‘Fearless’

Continuing to riff on the “Fearless Marketer” theme that permeated Marketo’s Marketing Nation Summit, at San Francisco’s Moscone Center, last week, CMO Sarah Kennedy took the stage for day two’s opening keynote asking the question: “What does it mean to be fearless?”

“Fearlessness should be at the core of all we do,” Kennedy told the audience. “But the goal is not always success—sometimes there’s no glory, it’s just a labor of love. In fact, failure can be a gut-check moment what makes us who we are. Fearlessness sometimes just equals ‘trying’,” In other words, “leaning into what we believe and not being afraid to fail can create a better version of ourselves in the end,” she explained.

That’s fearlessness on the personal level. On the business level, with things moving so incredibly fast, Kennedy said, today’s marketers are “accountable and responsible, but have no idea what’s coming next.”

Nevertheless, she said, there are three things we can do to maintain fearlessness. First, change perspective and attitude about failure. “It can be the beginning of the story, not the end,” she said, “so accept the shift, embrace it, and take action.”

Second, pick one thing and be fearless—but not reckless—about it. “Pick one thing to experiment with and take a risk from a new perspective. Bring your conviction and, remember, what works today might not work tomorrow.”

Finally, make space for your team. “Be their catalyst,” concluded Kennedy. “Give them space to learn and grow, and don’t dilute their passions. You must create a culture of empowerment. Decide to be bold and bring bravery to all you do. As leaders, we have no choice but to this.”

Move at the Speed of Culture

One speaker who clearly takes fearlessness seriously is Jonathan Mildenhall, former CMO of Airbnb and another day two keynoter.

“Things are changing at a rapid clip,” Mildenhall told the audience. “So, it’s imperative that brands and marketers ‘move at the speed of culture.’ Being purpose-driven will make you more successful than your competitors.”

Mildenhall explained how he is passionate about connecting consumers with brands in meaningful, authentic ways, and building community-driven brands that promote positive societal change.

“There are two values that drive all of my business decisions,” he said. “humanity—I try hard to be a decent human being—and creativity. For the latter, think about your inner child—is it the dominant voice? To be truly creative it must be, for the adult voice compromises creative instincts.”

Mildenhall offered the audience a quick history of former “superbrands”: the 1980s was defined by “Coke Is It”; the 1990s was the decade of Nike’s “Just do it,” which tapped into African-American street culture; and the 2000s was the time for Apple. As for Airbnb (though no longer CMO, Mildenhall is still working with the company as a consultant), “the vision is historic: nothing less than building the world’s net global superbrand.”

All of these brands have some elements in common, he explained. “There’s a fearlessness led by the speed of culture, there’s a recognizable value proposition, there’s an iconic mark and visual ID, and a universal ideology that transcends business.” For Airbnb, the brand vision is to “create a world where all people can belong,” as epitomized by its logo, called “belo,” for the first three letters of the word “belong.”

“Ambition has to be great,” he said. “The brand must define the generation we are in, and a new marketing playbook is needed as culture changes.”

Mildenhall went on to talk about how marketing partnerships can be hugely successful, even when—or especially when—there is not that much budget to be had. One he said he was particularly proud of involved Airbnb teaming up with the Art Institute of Chicago for a stay in Van Gogh’s bedroom.

Despite the best of intentions, he candidly told the audience, things can go wrong. At one point, Airbnb found itself being accused of racial bias.

“The CEO at the time brought all of the executives together to lean in and figure out how to change the way things worked. Everything stopped until we came up with a formal zero-tolerance policy for racial bias and bigotry,” he explained. “Eight months later, for $65,000, we produced an ad for the Super Bowl, based on the #weaccept concept, which changed the narrative. It was the second-most talked about spot for that year’s game.” 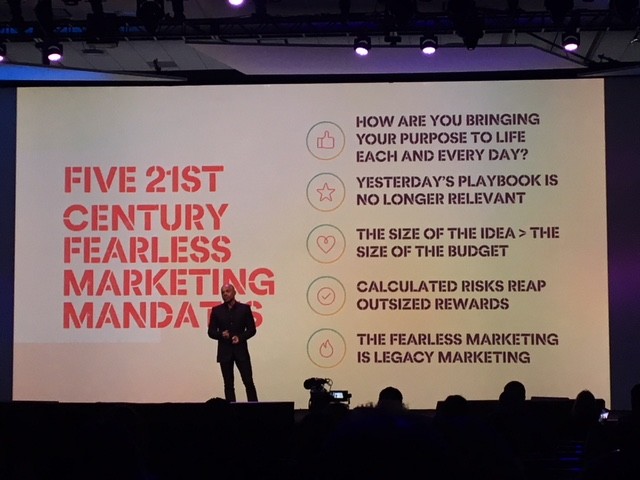 Now running his own firm, 21st Century Brand, Mildenhall concluded by sharing these five modern Marketing Mandates: “Bring your purpose to life each and every day; understand that the old playbook is no longer relevant; it’s not the size of the budget, it’s the size of the idea; and calculated risks reap outsized rewards. Finally, the main thing to remember is, fearless marketing is legacy marketing.”

Prep Can Make You Fearless

Not to be outdone in the fearless department, Olympian Lindsey Vonn sat down with Marketo CEO Steve Lucas for an amusing and wide-ranging interview on the final full afternoon of the conference.

“I think there are more people here than at the Olympics. . . no, I mean, really,” quipped Lindsey Vonn. The 6,000 marketers in the audience laughed hard.

“I started skiing at two-and-a-half,” Vonn told Lucas. “I mostly loved ski racing in the beginning for the sprinkled doughnuts and hot chocolate. But I really loved being on the mountain and pushing myself—doing my own thing.”

Lucas asked Vonn where her passion and drive came from. “I wasn’t very good at any other sports. I tried them all, but I was really bad at everything except skiing. It makes me happy. Going downhill at 90 miles an hour is fun for me.”

Vonn told Lucas that she took fourth place in her first race at seven years old. “I didn’t like being fourth,” she said. “The trophy really was just a participation thing. So, my early motivation was not getting what I wanted. I like proving people wrong.”

Her goal to be an Olympic champion came early, too. Lucas asked her about her first meeting, when she was a kid, with skier Picabo Street. “When I was nine years old,” she told Lucas, “I met her at a book signing, and, from then on, from that three-minute meeting, I knew I wanted to be an Olympian. It was an inspiring moment.”

“To get to this level, you have to be fearless,” said Lucas. “How did you develop that?” “I definitely have a screw loose,” joked Vonn. “In general, I’ve just never been afraid. I guess it’s my preparation that makes me fearless. If you put the work in, what’s there to be afraid of. If you make a mistake, well, that’s life. So, I work hard, don’t complain, and get the job done.”

When asked whether the recent games were her last, she frankly told Lucas, “Yes, I think it’s my last Olympics—unless someone can get me a new knee. It was really emotional, this last time, and knowing it was my last games was tough.”

Lucas then asked about her record for wins—she is five wins away from being the greatest skier of all time, man or woman. What does that mean to her. “My plan is to win six more, then retire, and live happily ever after.”

Lucas said he was curious about how she is handling the new world she is being asked to compete in—that of celebrity and red-carpet personality. “I always know my value, who I am,” she said. “but that other world in the spotlight was a challenge. But the more I did it, the better I got at it. It was a new challenge, and, like skiing, I had to put in the work to be successful.”

Lucas pointed out that, by one count, Vonn has had to deal with more than 70 major injuries—including, to everyone’s amusement, one to her thumb caused by a champagne cork. “How were you able to overcome all that,” he asked. “My injuries were my learning experiences,” explained Vonn. Those obstacles made me stronger and taught me lesson. The main lesson was, you have to seize the moment because you never know how many moments you have.”

Lucas concluded the chat: “So what advice would you have for the audience for stepping outside your comfort zone?”

“Believe in yourself, what you are doing, and your work ethic,” concluded Vonn. “That can make you fearless.”

Why Great Creative Is More Important Than Ever